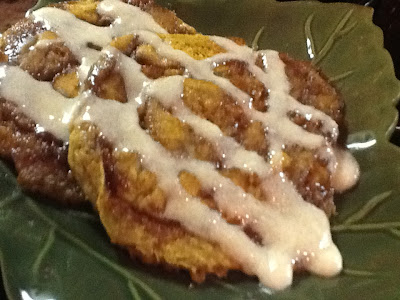 I've seen the cinnamon roll pancakes and went to www.recipegirl.com to check them out.  While there, I noticed a PUMPKIN version.  Since I'm on a pumpkin kick right now, I thought I'd try them out while our son is here recuperating.  He pronounced them "Delicious"!  Now recipegirl claimed that this makes 8 pancakes.  I, however, got 18 pancakes out of this recipe.  I just refrigerated the leftovers and warmed them in the microwave.  They're not quite as carmelized  as fresh off the skillet, but they're pretty darned tasty.

1. Prepare the cinnamon filling: In a small bowl- mix butter, brown sugar and cinnamon. Whisk the filling ingredients together and then pour it into a sandwich-sized zip baggie. Zip up the baggie and lay it on the counter while you prepare the pancake batter. I would suggest using two baggies, one inside the other, as mine split, and when that happens it makes a MESS!!

2. Prepare the Icing: In a medium microwave-safe bowl, heat butter and cream cheese 30 to 60 seconds, just until butter has melted and cream cheese has softened. Whisk in powdered sugar and vanilla and combine until smooth. Set the icing aside.

3. Prepare the pancake batter: In a large bowl, whisk together milk, pumpkin, eggs, oil, and vinegar. In a separate bowl, whisk together flour, baking powder, baking soda, pumpkin pie spice, salt and brown sugar. Add the dry ingredients to the pumpkin mixture and stir just until all is moistened.
﻿﻿﻿﻿﻿﻿
4. Check on your cinnamon filling: Knead the baggie to re-incorporate any butter that may have separated.  You want the mixture to thicken a bit- it's best when it's similar to the squeezing texture of toothpaste.  I actually stuck mine in the freezer for a few minutes.  Don't try to use the filling for the pancake swirl unless it has thickened as it will be too runny! Snip off a small piece of the corner of the baggie.

5. Cook the pancakes: Preheat a large skillet or griddle to medium, and butter it.    Use an ice cream scoop (or ladle) to add the batter to the pan. Use the bottom of the scoop or ladle to spread out the batter into a nice, even circle. Reduce the heat to medium-low. Pick up your cinnamon filling baggie and squeeze the filling into the corner. Starting at the center of the pancake squeeze the cinnamon filling on top of the pancake batter in a swirl (just as you see in a cinnamon roll). Cook the pancakes 3 to 4 minutes, or until bubbles begin popping on top of the pancake and it is golden brown on the bottom. Slide a thin spatula underneath the pancake and gently but quickly flip it over. Cook an additional 2 to 3 minutes, until the other side is golden as well. When you flip the pancake onto a plate, you will see that the cinnamon filling has created a crater-swirl of cinnamon. Wipe out the pan with a paper towel, and repeat with the remaining pancake batter and cinnamon filling. Serve pancakes topped with a drizzle of cream cheese icing.

﻿﻿﻿﻿Be prepared to taste the most decadent pancake!

Posted by kitty@ Kitty's Kozy Kitchen at 11:13 AM
Email ThisBlogThis!Share to TwitterShare to FacebookShare to Pinterest
Labels: breakfast, pumpkin