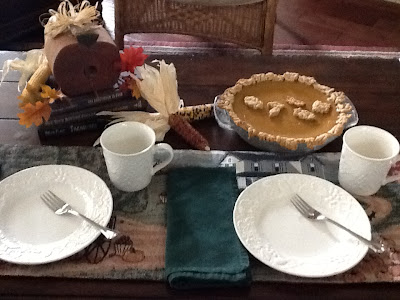 Our coffee table is set for dessert for two.  A pumpkin bird house is perched  on a stack of books. 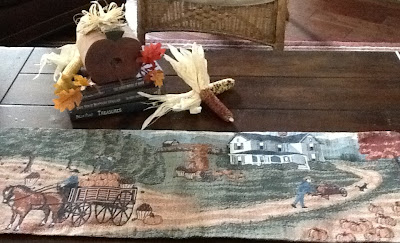 This table runner I've had forever, which has an  old-fashioned scene farm scene. 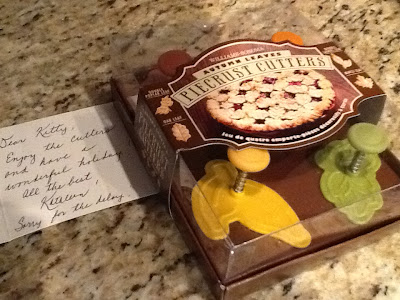 Recently Kathleen from cuisinekathleen.com/ had a giveaway and I was the lucky winner!  Thank you so much for sending these, Kathleen!!  I had so much fun using them and will continue to enjoy them for years to come and will think of you when I do. 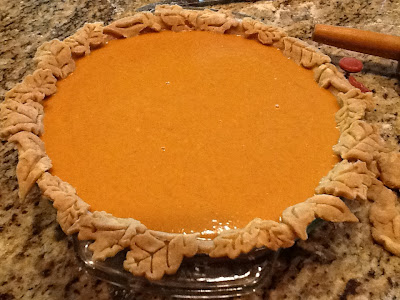 I have never tried adding spices to pie crust, but when I saw this recipe, I knew I wanted to try it with my pie crust cutters that I won in Kathleen's giveaway!  Although I tried America's Test Kitchen's recipe for their vodka pie crust, I wasn't overly thrilled. This recipe from Dash chef Jon Ashton was a dream to work with. Too much water in a pie crust actually forms gluten and can make the pie crust tough.  Vodka replaces some  of the water and makes the crust moist and easy to roll,and it turns out flaky and tender.  Do not worry about an alcohol taste,  for the ethanol in the vodka evaporates in the oven. You could leave out the spice, but for pumpkin pie and even pecan, it's really tasty, and really enhances the flavor of the pie.  I will try other spices for other pies for sure.

Add butter and shortening and process just until dough starts to from pea-size clumps.

Add water and vodka to mixture. Mix with hands using a folding motion, pressing down on dough until it is slightly tacky and sticks together.

Divide dough into 2 balls. Wrap each in plastic wrap, then flatten into 4-inch discs. Refrigerate for at least 45 minutes or up to 2 days.

When ready to roll out, make sure your work area and rolling pin are well floured. Roll dough to fit a 9-inch pie pan. Carefully transfer and crimp edges.

I followed the recipe for pumpkin pie from the back of the Libby's can, only adding some freshly grated nutmeg in addition to all the other spices.

Happy Thanksgiving blessings are sent to all!


I am sharing with:

Posted by kitty@ Kitty's Kozy Kitchen at 8:15 AM
Email ThisBlogThis!Share to TwitterShare to FacebookShare to Pinterest
Labels: pie crusts, tablescapes