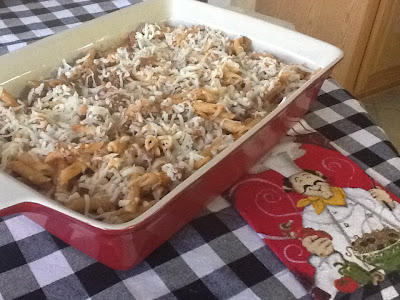 Before I EVER knew about Baked Ziti, there was Johnny Marzetti.  It must be  because I grew up in Columbus, Ohio, where the Marzetti restaurant was located.  According to Jean Anderson, in her The American Century Cookbook, The Most Popular Recipes of the 20th Century, she says that Johnny Marzetti was a 1950's/early 1960's party favorite casserole.  The actual  Johnny Marzetti is the brother of the owner of the Marzetti Restaurant and the recipe was created in the 1920's.  I used to make this quite often when my kids were growing up.  Here's how I do it:

In a large skillet, heat the oil and add the chopped onion and cook until it is translucent.  Add the mushrooms and cook until juices are released and evaporated. add beef and cook, breaking up clumps, until no longer red.  Turn off heat and add the sauce and 1 cup of the cheese.  Add the partially cooked pasta (it will continue to cook in the oven) and toss.

Transfer the mixture to a baking dish.  Scatter the remaining cup of cheese on top.

Bake, uncovered until browned and bubbling, about 35-40 minutes.

NOTE:  If you prefer, use mozzarella cheese instead of the cheddar.


I am sharing with: