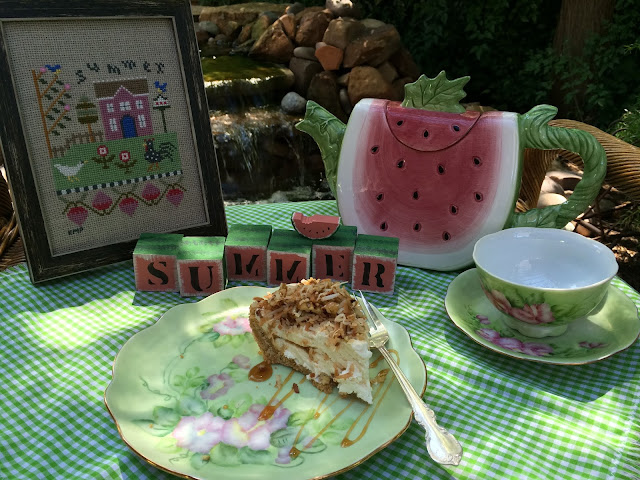 Today is National Ice Cream Day and I'm sharing a recipe for a frozen dessert that tastes like ice cream.  I found this recipe on www.allrecipes.com and it's a great one because it makes two pies.  That way you can serve one and stash one away for unexpected company. You can also make this in a springform pan for a large version to serve to a crowd.  You don't need a big slice of this to satisfy a sweet tooth! 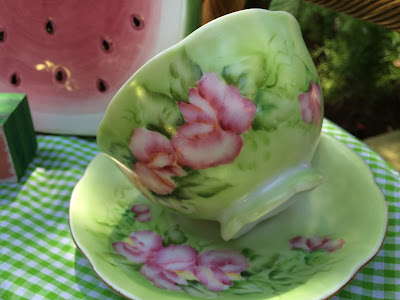 This pretty teacup was one that was painted by my late Great Aunt Kitty.  It looks so pretty with my watermelon teapot. 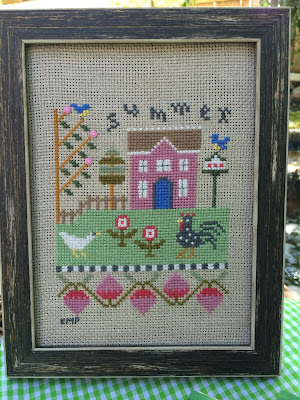 I love these Lizzie Kate seasonal cross stitch designs.  I'm working on the Fall one now. 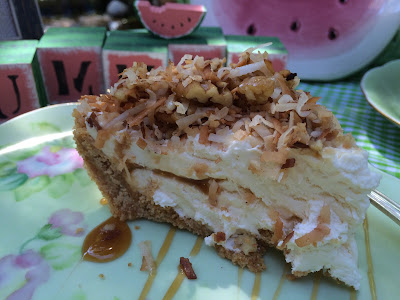 Oh my goodness, is this pie ever decadent!  You can purchase the pre-made graham cracker shells, but I like to make my own.  The crunchy topping makes this pie extra-special.  Here's my slightly adapted version.

Place butter in a medium skillet and melt over medium heat. Add coconut and pecans, stirring to coat. Saute until coconut and pecans are lightly toasted, (the directions said for 5 minutes, but I toasted them for about 8-10 minutes).   Set aside.

Update on my son Mike:
Mike had the spinal cord stimulator surgery, with a wireless transmitter, done this past Wednesday.  The surgeon asked if he could day a prayer with Mike before the surgery, which was so nice and brought tears to my eyes.   After the surgery Mike went home feeling very discouraged because the stimulation was only being felt in his left leg, and none in his right, even though the rep tried to tweak it.  Two reps met with him two days later at his pain management doctor's office and the one rep was able to get it working.  He will need to charge the battery that's implanted in his right hip about once a week, by lying against the transmitter,  for about 20 minutes.  He will also need to have the battery replaced in about 10 years.  Hopefully this will help bring him to a more active lifestyle, than the pain he's been in for the past 3 1/2 years. After he heals in the next 6-8 weeks, he will be free to do whatever he wants.   Thank you so very much for all your concern, well wishes and prayers.

I am sharing this with:
Tea Time Tuesday
Tuesday Cuppa Tea 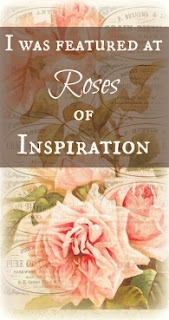