This is a fabulous recipe from Weber's Time to Grill!  It's so hot in Texas right now, we could probably cook the chicken directly on the patio!!!  Instead of using a whole chicken, I used 3 chicken breasts halves with ribs.  This is a great recipe to have if you have a rosemary plant in the garden.  The chicken turns out SO moist & juicy.  Even though I don't usually eat the skin, I tried a bite & it was so crisp & flavorful.   I hope you try it! 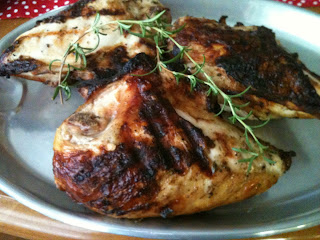 In a small bowl whisk the marinade ingredients.

Cut the chicken into six pieces: two breast halves, two whole legs & two wings (remove the wing tips.)  Brush each chicken piece on both sides with the marinade.  If you have time, marinate the chicken in the refrigerator for as long as 4 hours.  If not, you can roast the chicken right away.  (I did marinate mine all afternoon.)

Grill the chicken pieces, skin side down, over indirect medium heat, with the lid closed as much as possible, until fully cooked, turning once or twice.  The breasts & wing pieces will take 30-40 minutes & the whole legs will take 40-50 minutes.  During the last minutes of grilling time, move the chicken over direct medium heat & cook until well browned all over, turning once or twice.  Remove from the grill & let rest for 3-5 minutes.

I am sharing this recipe with  On the Menu Monday at Stonegable & Foodie Friday.