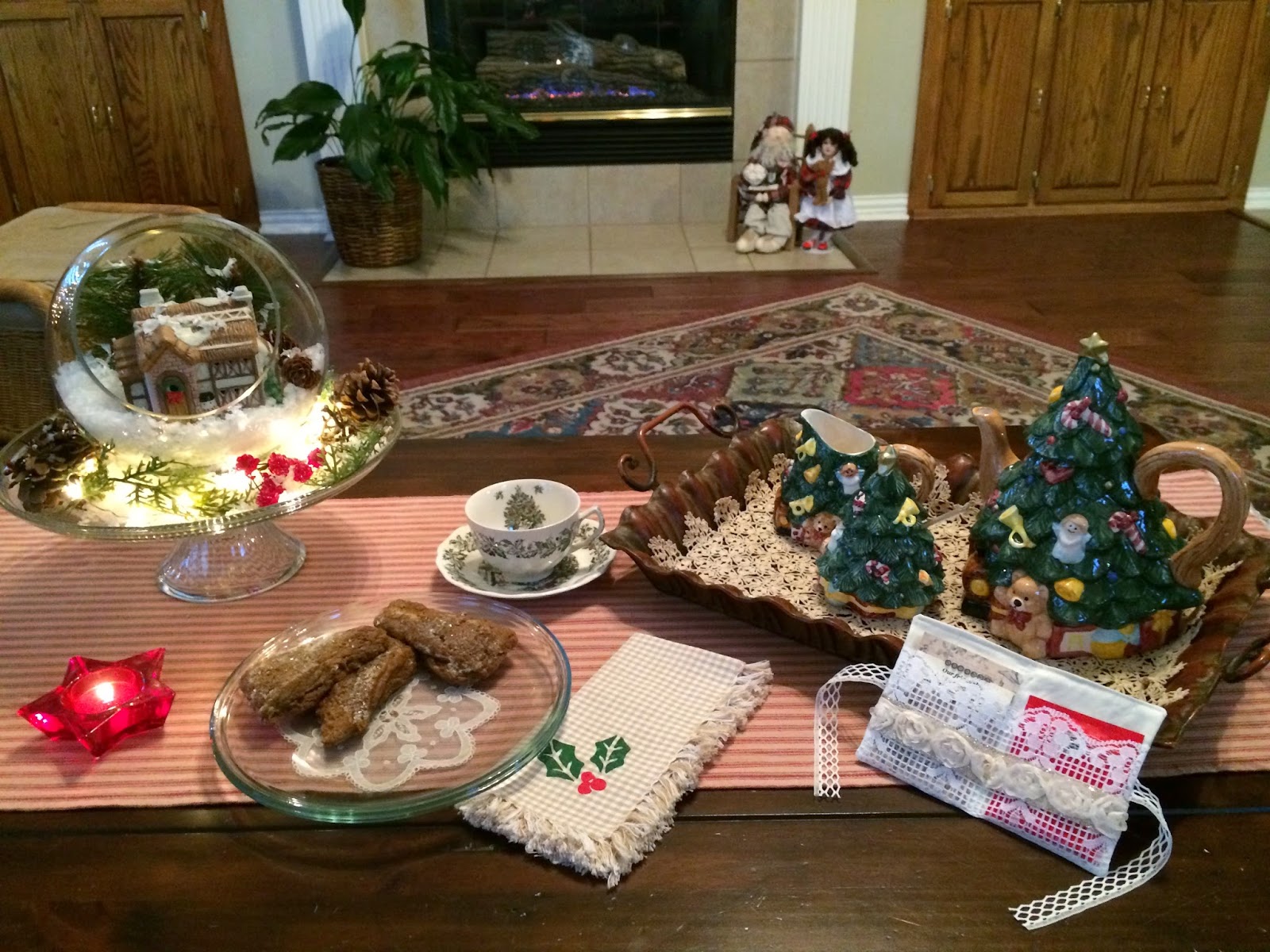 For today's tea, I'm serving Gingerbread Scones.  I'd love to share one with you.
Kathleen from  Cuisine Kathleen is having her challenge for December's Let's Dish! party by copying a design from Pinterest or a magazine, etc., to use for our table. 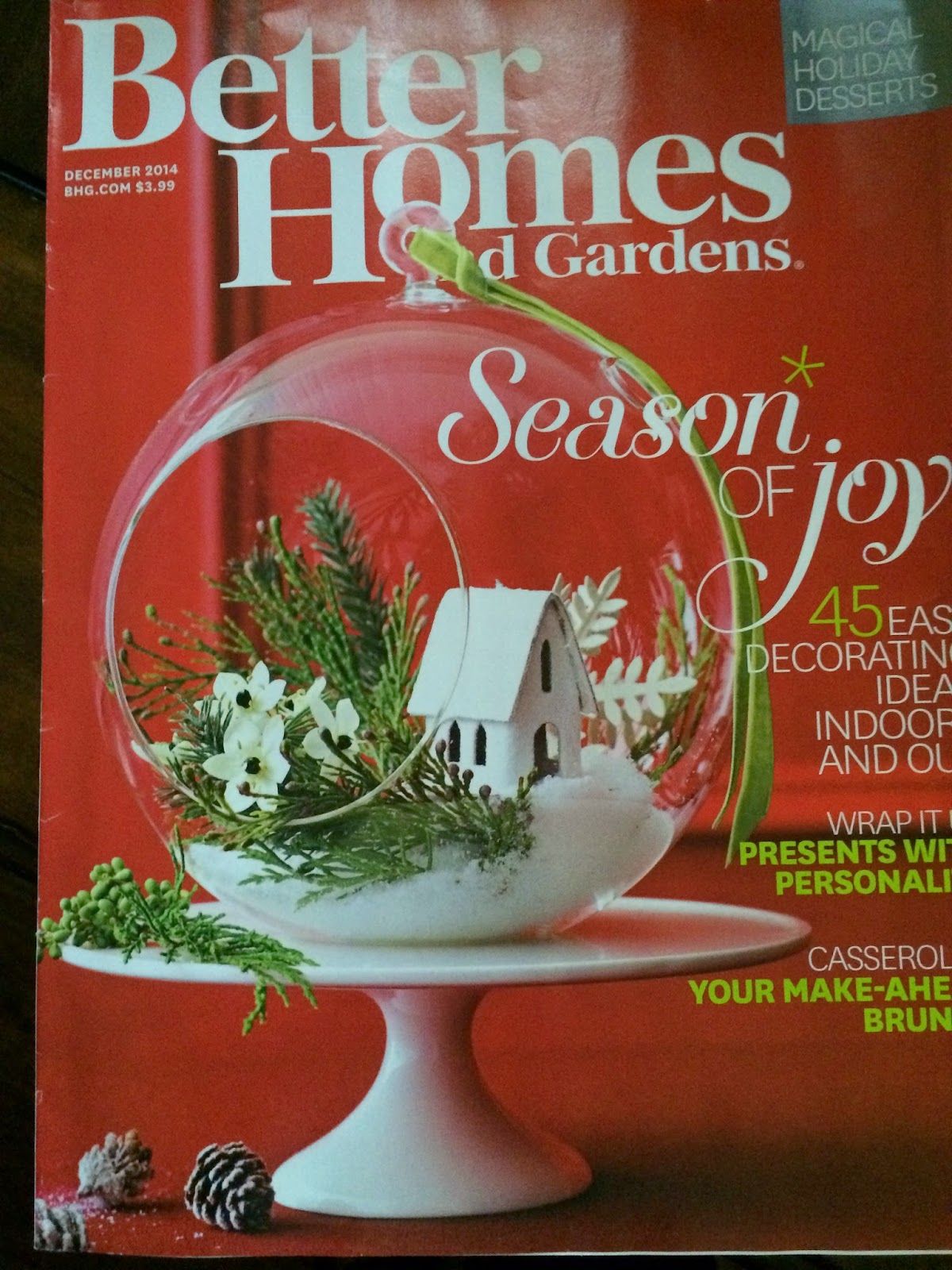 I choose to copy the cover of Better Homes and Gardens because I fell in love with this glass globe on a cake pedestal.  The people at BHG used a hanging terrarium, but I had a round glass vase and one of my son's suggested to use something flat underneath to hold it in place. 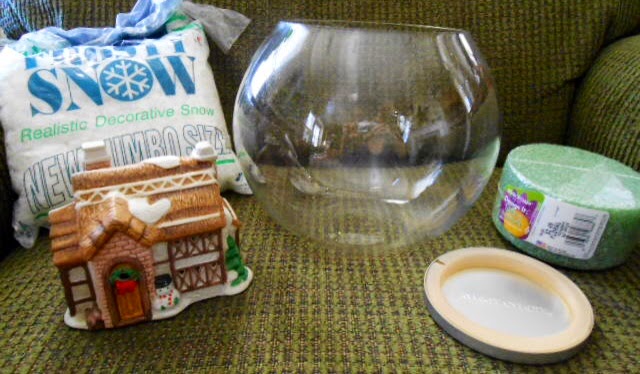 I used a candle cover under my vase in order that I could anchor it.  I had a cottage, fake snow and some green foam. 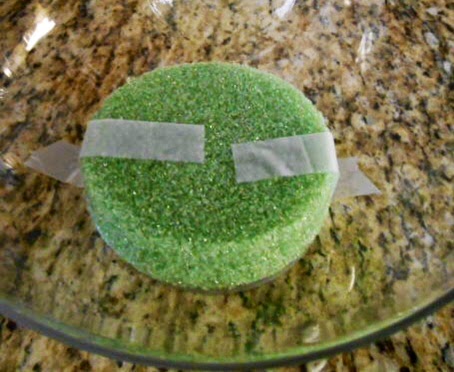 I taped some green floral foam inside the vase in order that I would have a flat surface for my cottage. 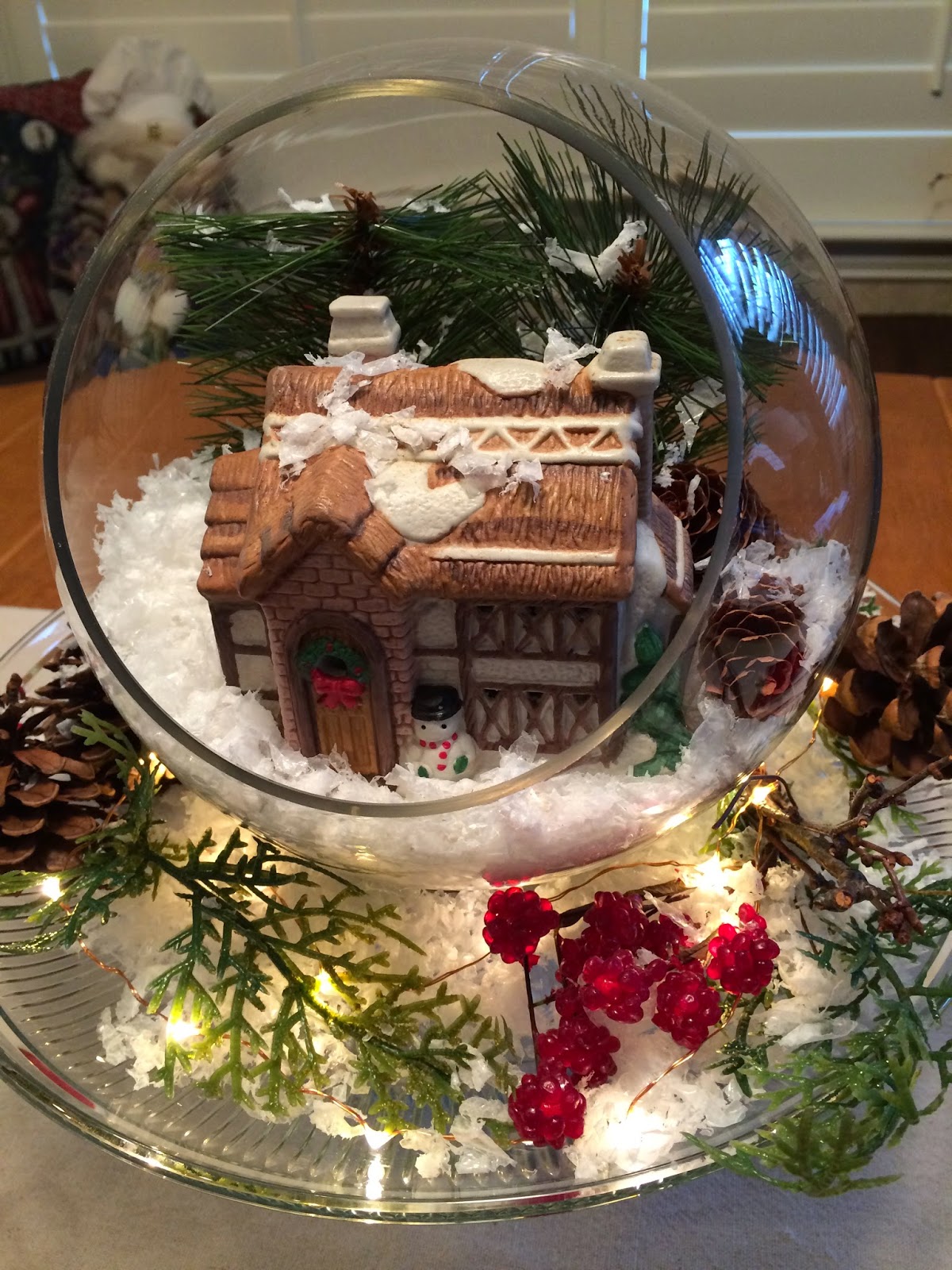 I didn't buy anything to make this project and I have to tell you that it was such fun to do. After taking apart an old garland, I added some greenery  behind the cottage, and added some pinecones, and a sprinkle of fake snow inside the globe and and around the cake pedestal.  A strand of battery operated lights give a special sparkle at night.  The cottage reminds me of the one in the movie The Holiday. 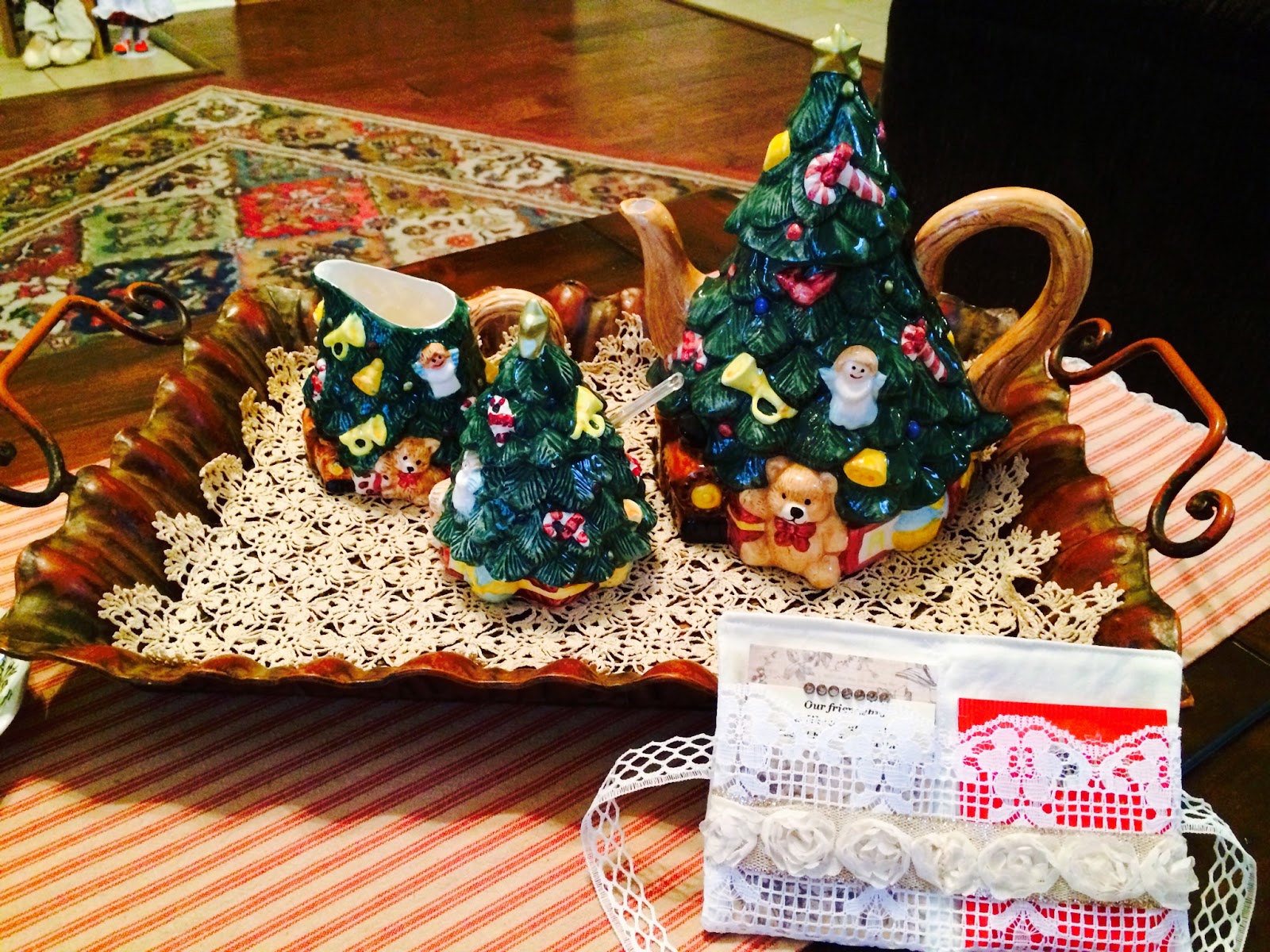 I'm using my tea service that my youngest son bought for me back in 1996.  Do you see the sweet tea envelope?  A dear friend sent this beautiful handmade one that is adorned with roses and lace. 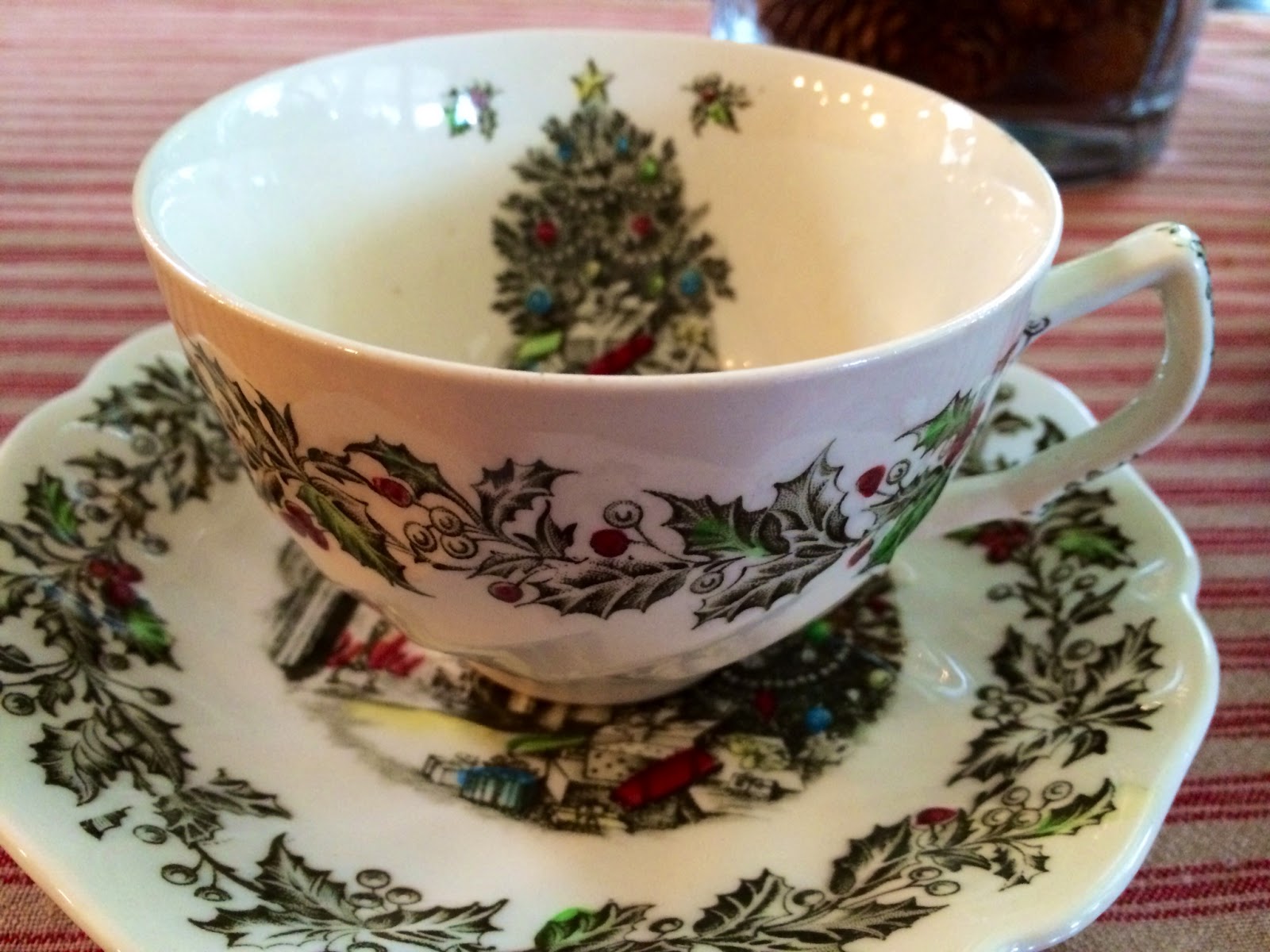 This tea cup is Merry Christmas from Johnson Brothers that was a recent eBay find.  The old- fashioned, vintage design reminds a long ago era. 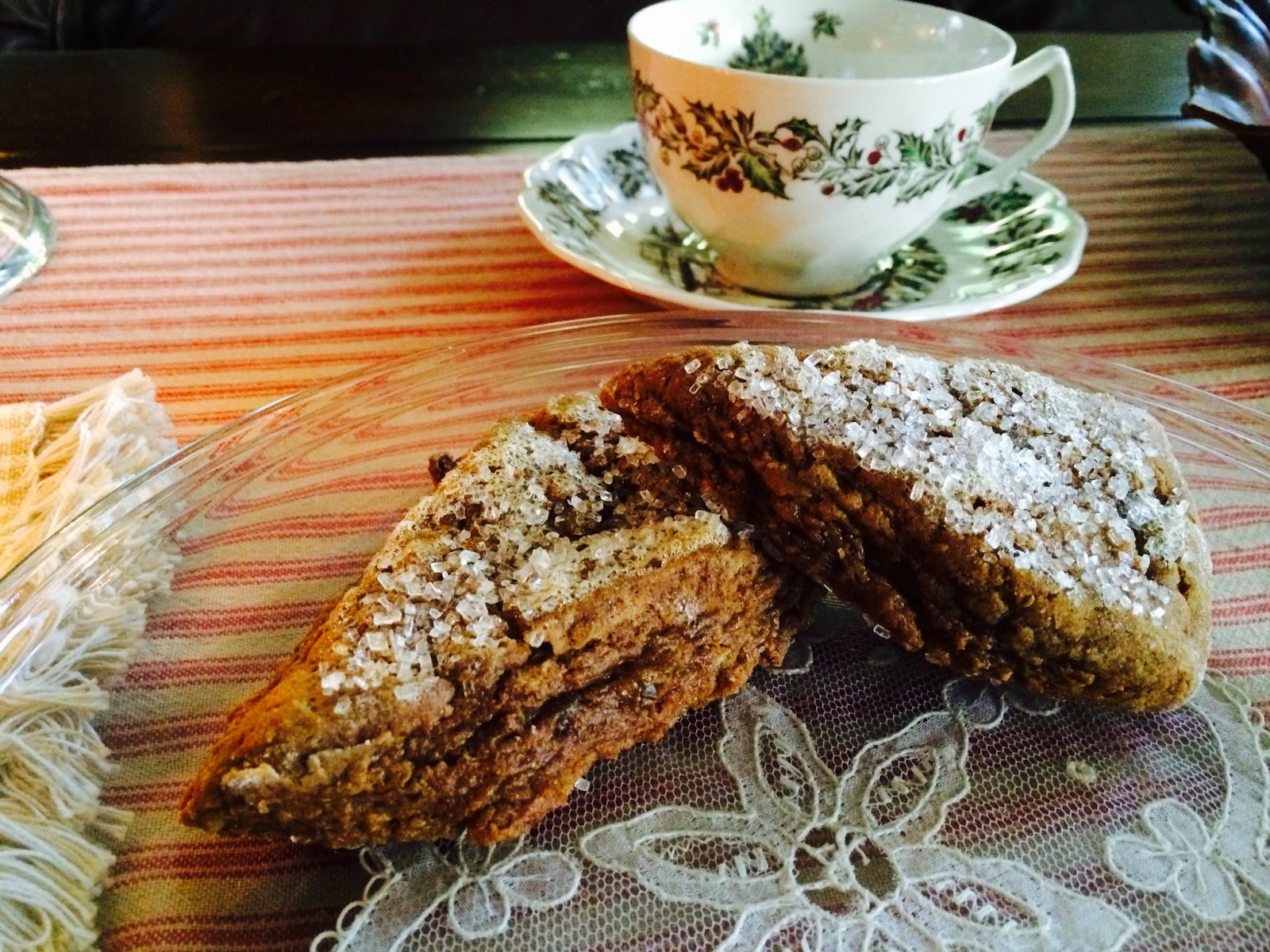 This recipe was found on the Grandma's Molasses website, but adapted it to suit my tastes, by doubling the ginger and cinnamon and adding some cloves.  If you decide to make this, I would cut the scones into eight instead of twelve, as they were rather small.  I wanted a spicy, old-fashioned flavor for today's tea.  These scones are very moist and get even more moist if sealed in an airtight container.  I have to reheat them in an oven.

Gingerbread Scones adapted from a recipe from Grandma's Molasses
In a large bowl, combine dry ingredients. Cut in butter until mixture resembles coarse crumbs. In a small bowl, combine the molasses, milk and egg yolk until smooth. Stir into the flour mixture until moistened. Turn out onto floured surface; knead gently 6–8 times. Pat into an 8˝ circle; cut into 12 wedges and place 1 inch apart on a greased or parchment-lined baking sheet. Beat egg white until frothy; brush over scones. Sprinkle with sugar. Bake at 400º F for 12–15 minutes or until golden brown. Serve warm. Yields 12 scones 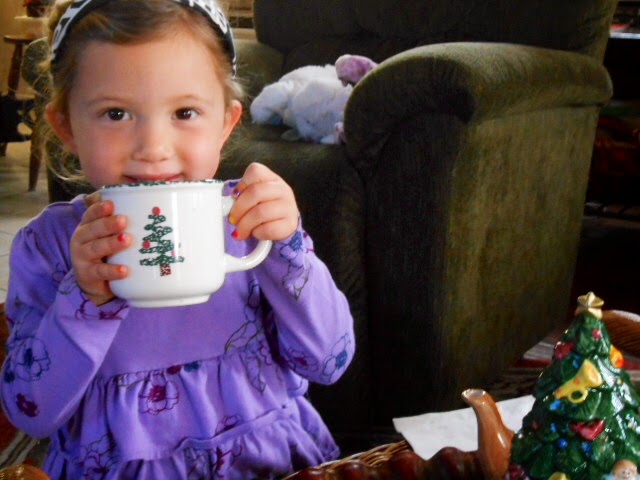 This little doll enjoyed her own cup of Vanilla and Cinnamon Tea with me.

Posted by kitty@ Kitty's Kozy Kitchen at 2:00 AM
Email ThisBlogThis!Share to TwitterShare to FacebookShare to Pinterest
Labels: scones, tea, vignettes